I came up with the blog post title last week when I was contemplating how time had gotten away from me. My writing practice similarly has slipped sideways, left behind in a tumult of “very important” other things. Apparently I’m easily distracted which is not a good thing when one is trying to shift their approach to life and livelihood.

So what distracted me last week was a resurgence of potential work in my field (consulting and training with nonprofit organizations). A colleague contacted me to join her in bidding on a significant training project. I had to wrap my head around a project scope and scale (not to mention logistics) that caught my rusty brain off-guard. Back to technical writing of a sort.

And what about my pledge to the one creative act a day?

My catalogue is pretty empty for August as it was in July. July was travel and as full of wonder that was, it depleted my creative account in ways I didn’t expect. Some days I barely pulled a creative thought out of my mind, let alone act on them, although I was surrounded by creative (art! music! museums!) for most days. I guess being an observer rather than a participant interestingly enough, doesn’t foment creativity – at least not in me.

I’ve not been totally asleep in August however. I was awarded a small grant for what I’m calling a “people’s production” for the opening of the new Orange Line – a light rail transit line in Portland. This 45 minute piece combines songs from the Portland State University community choir made up of faculty, staff and alumni, and morris dances from Renegade Rose morris. I’m even writing a new dance for the team to celebrate the Line. This is almost but not quite giving me sleepless nights – lots of people are still out of town so it’s difficult to rehearse. Performance is Sept 12 in Portland if you happen to be here (or live here). You can’t miss us, we’ll be dressed in orange T shirts (not my best color or look but hey you gotta do what you gotta do for art). Although I suspect so will a lot of other people.

Tomorrow it’s time for Judith’s Hat Attack one of the best places to be on the first of any month.

Alchemy that anyone can do. Truly.

We’ve been having a college student stay with us this summer. She’s from NYC and is here for an internship with a local health maintenance organization. We have hosted two other students and without exception, they’ve all liked our cooking (whew!). Perhaps because we cook from scratch, eat a lot of vegetables (we belong to a CSA – community supported agriculture) and don’t own a microwave.

I was chatting with my son, who now lives in Chicago, about cooking and tossed off that I thought I was “a pretty good cook” – his response, which of course I loved, was essentially, “mom, you ARE a good cook”. Which got me thinking about cooking at home and evolving as a cook (and baker).

Of course we took short cuts when we had small to medium sized children. And when David and I were dating we ate out quite a bit. But there are things that contributed to our family’s approach to cooking and food:

There is very little ‘bad’ that can happen if you make a mistake. It is unlikely you will rip a hole in the time space continuum. So if you find yourself confronted with a frig full of rapidly wilting vegetables, take about 15 minutes to chop them up. If you haven’t time to move on to the next step, freeze them, otherwise….

Take whatever you’ve got in the frig, chop up the veg into approx ¼-1/2 inch pieces. Be sure to include at least 3 cloves garlic and 1 chopped onion. Leave out the Brussels sprouts, broccoli, beets and/or cauliflower (roast those individually instead).

Start with the onion and garlic and sauté.

Add the “hardest” veggies next (i.e., carrots) and sauté until medium soft. Continue adding veg from hardest to most pliant (ending with the leafy greens like kale).

From here you can season and serve or use as the start of a soup.

Take whatever you’ve got in the frig, chop up the veg into approx 1/2 inch pieces . Toss with olive oil (about 1 Tb) and sprinkle with salt. Spread on a cookie sheet in one layer and roast at a 450 oven. “Hard” vegetables like carrots, broccoli and potatoes take longer up to 45 minutes or so. Test these and other veg after 15-20 minutes. Your veg should be “soft” – chewable but not mushy. You can serve as is, combine together, or add to a soup.

Skip the Sauté – Veg for soup

Take whatever you’ve got in the frig, chop up the veg into approx ¼-1/2 inch pieces. Be sure to include at least 3 cloves garlic and 1 chopped onion. Leave out the Brussels sprouts, broccoli, beets and/or cauliflower (roast those individually instead). Throw these into a soup pot or slow cooker with at least 2 cups of chicken broth or veg broth or until veg are covered (either homemade, canned or from concentrate – I like Better than Bouillon—you can also use water but broth adds flavor and depth).

Slow cook on high for 4 hours. Before serving, correct seasoning and throw in any of the following: cooked chicken, leftover shredded meat, cooked hamburger, shredded kale, cooked chickpeas. Really whatever you have got.

An example of what I built (cooked) from stuff wilting in my frig.

Zucchini Stir up (aka ratatouille)
1 onion chopped
3 cloves garlic: minced, smashed, put through a press, whatever
4 zucchini sliced in half or quarters and chopped into ½” slices
2 large tomatoes, diced and put in a colander to drain juices (I smashed these a bit)
Salt and pepper. Chopped basil if you’ve got it. Or a bit of dried basil.
Optional (I used these, as the add a nice interest but if you don’t have them you don’t have to use them).
2 TB drained and rinsed capers
2-4 Tb. either pitted and chopped Kalamata olives or olive tapenade
Sauté the onion and garlic for about 10 minutes over medium heat until onions are soft.
Add zucchini, cook another 10 minutes or so (again until they have lost their raw crunch).
Add tomatoes. Cook another 5- 10.
Add the capers and olives or tapenade. DO NOT salt until you’ve added these because they can be quite salty and add enough of that to the dish on their own.
Taste and correct your seasoning. Which means, add more salt and pepper if you like. 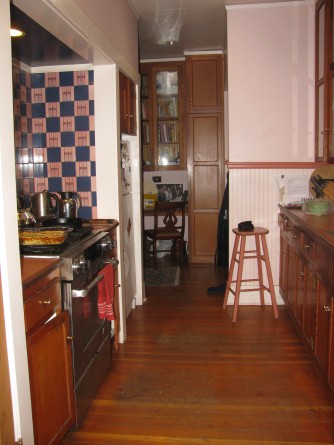 My kitchen: location of alchemy in our house.

Because I was traveling for three weeks and much of it in the company of 10 others I found, not to my surprise, that writing took a back seat.  We’re back in Portland now and I find I have much to catch up on.  But as it’s August 1, Judith’s Hat Attack is on my mind and so that’s where we’ll start. With a photo at home in a hat.

Last year I was preparing for an August trip with my family. This year July found me in Venice and then England with my dance team (we are all gathered below — I am not wearing a hat.

We spent four days in the Gloucester area and 5 days on a canal boat. Did I mention there were 11 of us?

When our kids were little, travel had a somewhat slower pace as we needed to adjust to their needs. Now I find that I’m anxious to absorb as much as possible and so days start early and end late.  Last year I really noticed how being with and in groups of people taxed my reserves.  Even though I like, even LOVE the social elements apparently I need some ration of down days, though I haven’t quite figured out what the ratio is.

Reflecting on what’s happened is also important to me and I find travel does not necessary lend itself to writing or reflection.  I could have said no I’ll stay home, but I guess I didn’t want to miss anything when my husband or teammates took off for an adventure. Yet lack of balance in what I need (versus what I want) can make me a very cranky person!

I hope to have more dollops about the trip in the weeks to come.  If I’m not swept up in the current of today.

Views from my garden bench

the great outdoors, wellbeing and life in the North

Rambling in the Garden

Wandering The Path of Slow Fashion

When you have only two pennies buy a loaf of bread with one, and a lily with the other.

Tearing Up The Pea Patch

Not Dead Yet Style