Singers in the shade

Just this past June a very interesting email crossed my desk. I work at a university teaching nonprofit management (the day job) and am the fore or artistic director of a local dance team (Renegade Rose Morris). It was in this capacity that the email caught my attention – it was a request for proposals (RFP) from artists to propose visual or performance pieces for the inaugural celebration of a new transit line – the Orange Line.

Well, that sounded cool. And doable. And came with a bit of funding.

How hard could this be? My famous “last words.” I could develop a performance piece for my dance team.

Some elements would come together pretty easily such as securing team interest. In order to have a substantive performance, the next brainstorm that occurred to me was to combine the dance team with the university’s community chorus into a kind of “people’s performance” celebrating both transit/travel and the history and nicknames of our city.

June was thus spent drumming up interest and developing a proposal – did I mention I was about to go out of the country for 3 weeks?

I actually was not overly optimistic about being awarded a grant. I’m not teaching performing arts and my background is in counseling but I was excited about the opportunity to join two community groups together in celebration. But about two weeks before I left town, we received word that we were funded.

I got a bit scared. Terrified really. Could I pull this off.

August 1 we returned – 6 weeks til due date. I had a tentative outline of the performance and a very, very tentative idea of dances and songs. For the chorus, I was able to draw on songs we had performed the previous term, a good thing as it turned out since we had a somewhat unexpected transition in music directors.

But the road here didn’t get automatically smoother. The twenty or so members I expected when I polled in June had dwindled. There was even talk from some about pulling the plug but I was determined that this was a great opportunity for the chorus and got permission to add “guests” – friends of mine that could fill in quickly.

On the dance front I had much more to do. I had promised a newly composed dance – Orange Line in Bloom – for the performance. I also needed to link up dances with the nickname themes at least in some plausible way. Oh and compensate for the fact that eight of my dancers, including some of my most experienced, would be at another rehearsal.

It was easy enough to match up dances with some of the nicknames. But what about Orange Line in Bloom. I had absolutely no idea what this dance was going to look like. I knew what I wanted – something additive/subtractive, like people getting on and off the train, a dance that might change directions (again like the train), and movement(s) that had the sense of blossoming outward. And I had a tune. but solid ideas were not forthcoming for days.

I can’t really pinpoint then, the most important “how” of how this dance came to me. I had two parts of the framework set the blossoming and the direction change. I also had a sense of the movements and space orientations. Now I just had to tackle the additive/subtractive element — to begin with one person, then to get 8 people in and out of the dance, ending with only one.

The final program got solidified in the last two weeks. Of course I was a bit nervous.

It was 90 degrees and we danced and sang over the noon hour resplendent in our orange shirts and bandanas. The train even tooted at the appropriate time during “500 Miles” (what luck!). I think we put the bloom in the Orange Line.

Our son moved to Chicago in  April to find a job and incidentally look after my folks a bit.  His job hunting in Portland was unsuccessful. (Too many foodie transplants competing with a native? Who knows.) But he found a job at a great place on the north side near Wrigley Field and so has opportunity to practice and hone his baking and pastry chops. I am all over the research and development, suggesting ideas and combinations that he might use someday.  We were chatting about showcasing a good French buttercream and I thought, “hey, why not something with a maple buttercream frosting.”  The picture obviously does not show one iota of maple buttercream frosting but it is a picture of the first step, maple bacon banana cupcakes.  After all, we are from the land of Voodoo donuts, the place that made the maple bacon bar famous.

Even without the frosting, these were fabulous. And I made them gluten-free for some of my GF friends.

Your kitchen should smell redolently of banana bread. You can frost these with maple buttercream and top with more candied nuts. But they are perfectly good as is.

I know there are a lot of good food blogs out there.  But in the privacy of my own home, the kitchen is a laboratory. I love it.

Yes, summer appears to be winding down in our part of the world.  We finally had some cool days and much needed rain last week. The tomatoes are slowing their production, the winter squash are coming in and the sun is getting an equinoxical slant.

Last week I ordered flowers for a wedding and put together two wedding bouquets in that end of summer splendor of zinnias, dahlias and sunflowers.  What a joy to create such beautiful things for two beautiful women.

Here are some different views of the bouquets 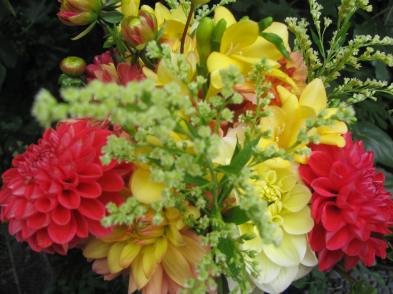 I haven’t always liked working with oranges and this “hot” palette but I do love flowers in all forms and find that this color range really does go with the end of summer.

Patti is back with Visible Monday so I’m heading on over with a late summer inspired skirt and some very cool Italian shoes.

Views from my garden bench

the great outdoors, wellbeing and life in the North

Rambling in the Garden

Wandering The Path of Slow Fashion

When you have only two pennies buy a loaf of bread with one, and a lily with the other.

Tearing Up The Pea Patch

Not Dead Yet Style